Technical Specification of the MAC Generation

Because both the merchant and the acquiring systems will generate the MAC, it must be easy to implement:

A number of MAC generation schemes exist. Due to the nature of this implementation, any MAC scheme must be at least resistant to known-text attacks.

The Cipher Block Chaining MAC algorithm has been shown to be secure when a secure underlying encryption algorithm is employed[2]. CBC-MAC is very secure on messages of a fixed length and very suitable for our purposes[3]. Because our messages use XML DTDs, they have a definite starting and ending point. A malefactor’s attempt to add additional content at the end of the message will fail to match the XML specifications of the transmission.

CBC-MAC uses bitwise XOR operations to construct a hashed value out of the plaintext input “P” broken into blocks “P1”, “P2”, … “Pn” each of size b bytes, the specified key “k” and an encryption algorithm E(k). However, the CBC-MAC algorithm is only valid for a specified length of message and only if those messages are a multiple of b bytes in length. This first restriction is to prevent malefactors from appending new information to the end of the message until the resulting forgery computes to the existing hash resulting in a “collision” for the same hash value. Because our message format is based on a DTD, this problem is removed; additional content at the end of the message would result in a poorly formed and thus invalid XML document. The second restriction is also easy to remove: If Pn < b, then pad Pn with zero bits so that Pn = b.

The algorithm if very easy to implement as visualized in the following schematic: 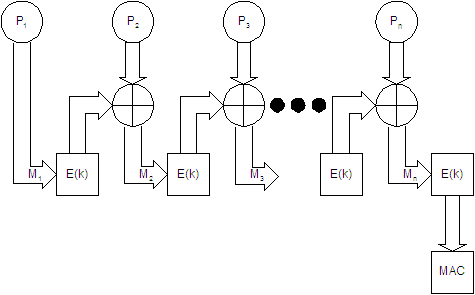 [1] See Menezes, A., P. van Oorschot, & S. Vanstone. Handbook of Applied Cryptography. CRC Press. 1996. Chapter 9 for a more complete discussion of the mathematics behind this issue.

[3] The only danger with CBC-MAC lies in the fact that the recipient necessarily holds the same key as the originator of the message. The recipient can use this key to decipher the hash in the reverse direction and generate a new message with the same hash value as the original message. Because a trusted relationship exists between the only two partners with a specific merchant key, and because of the way this design makes use of MACs and their corresponding messages, these concerns do not apply to this context.