Use Case diagrams show the associated roles and accesses available to actors and other systems external to the system. They show how users can interact with the system while avoiding the complications of diagramming the internal workings of the system. There are three primary use cases for this system: shopping cart transactions, cardholder transactions and key update transactions. 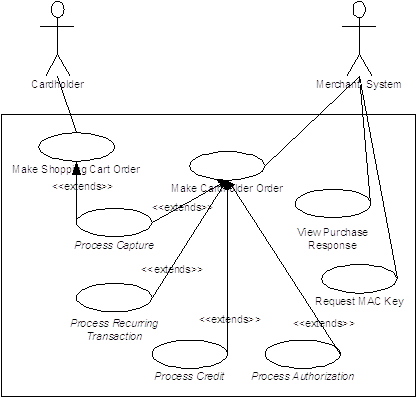 Shopping cart transactions have the Merchant system create a Shopping Order that is passed on to the Acquiring system. Cardholders are then redirected to the acquiring system as well, where they supply their cardholder information and confirm the purchase details. The system then processes the purchase by parsing the details and constructing a message to send to the host. The response from the Host System is then interpreted and a Purchase Response created in the system. This Purchase Response can be pushed back to the merchant using a number of methods: e-mail, HTTP or a web interface.

Cardholder transactions function in the same manner except here, the cardholder has supplied their cardholder and order fulfillment to the merchant through a secure interface on the merchant’s web site. In this case, the merchant creates both the Shopping Order and the Purchase Order. All other aspects of the transaction are unchanged.

The final scenario is the creation of a new MAC key for a merchant. To request a MAC Key, the merchant or its agent will use a secure web interface to request a new key. Since the system uses symmetric keys for its MACs, this key will returned to the merchant and also be retained by the system for MAC verification.