Value-Nets: Helping us Anticipate the Future

In his book, Co-opetition, Adam Brandenburger uses the metaphor of "Games Theory" to try and explain to business leaders that business is not war and can't be seen with a win-lose mindset. Rather he suggests that it is about growing the "pie" and also making sure that however you grow the pie, you should also get a larger amount of the total pie for your efforts. He is critical of companies that come into the market place and start a price war. Price wars decrease the size of the pie; even if you get a larger market share of the end result, sometimes 90% of something smaller is less than 10% of something big. He lists a number of companies that ended up doing just this.

He introduces the concept of the "Value Net". These are the players of the game. They naturally include your customers as well as your suppliers along with your competitors. But he also introduces complementers. These are companies that do not directly compete in your industry but which have a shared interest with you. For example, complementers to an automobile manufacturer might be petroleum companies, banks and insurers. Recently, SaveOn Foods has been giving away discount cards to PetroCanada to try and entice people to both buy groceries at SaveOn and take out a PetroPoint card to encourage loyalty to a brand of gasoline.

In Brandenburger's model, businesses may want healthy competitors to ensure that there is enough capacity for your suppliers to survive--provided that everyone can make a profit. The key to success is to be "allocentered"--to put yourself in the shoes of other players to: 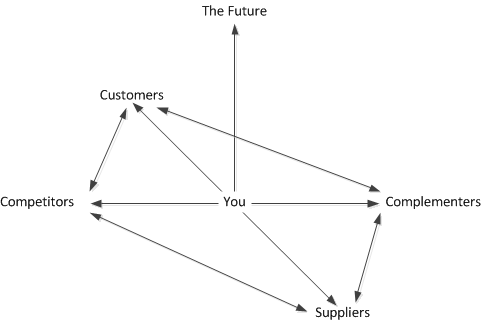 To these considerations, I would add one more: understand how the game will change in the future. This is probably the part of the game where human performance is dismal. I have seen so many companies that are so concerned with surviving today that they have almost no strategic plan for the future. When a new technology arrives, they show up a day late and a dollar short and miss the opportunities of arriving near the front of the line.

The best thing is that strategic planning doesn't need to cost a lot. "Big Data" can be an expensive initiative, but there are hundreds of low-cost options that companies can introduce that have very quick ROI calculations and which can help position a company's IT assets to leverage additional growth and opportunities. Similarly, aligning to public sentiment on food and energy sustainability can actually save money and provide large benefits in credibility and reputation.

The key step to surviving into the future, as Brandenburger suggests, is to become "allocentered." Instead of keeping our nose down and looking straight ahead, we need to consider the entire game from the perspectives of our customers, suppliers, competitors and complementers, as well as the mood and direction of society as a whole.